In the uncertain time when Genny Mobility was not in production I decided it was a good idea to get what parts I could together to keep my Genny running. My gearboxes were getting increasingly noisy and although I had changed the oil and various other components in the drive train, they were a worry

As a backup I purchased a very low mileage second hand Segway at the end of last year (2019). It was a 2009 model and came with an 1 extra faulty battery. I was very cautious as that is old, particularly for the batteries, but I was reassured the see that it has less than 200 miles on the clock. It had had a very quiet previous life at a shortcut to the village pub 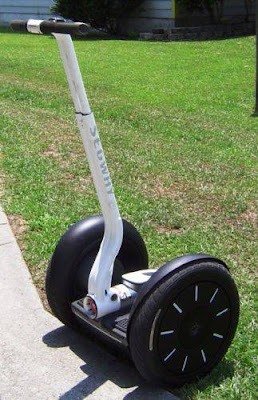 It was great to have a play on a stand-up Segway but my interest was mainly about it as parts. My mobility is now such that although I can get around in a limited way, I would be lost without my wheels

It turned out that this Segway was in fantastic condition apart from the batteries. I think at some point is had probably been left for a considerable period and that one of the batteries had dropped below a point it could be recovered. So this was why there were 3 batteries, one built in 2015 and the original 2 batteries that had been constructed in 2008 one of which didn't work

Although a shame about the batteries, the rest of the Segway was pristine so I changed the entire unit for my original and was cruising with less than 200 miles on the clock again. I had plans to rejuvenate my own unit and had another trip to Antigua lined up in February so needed something I could depend on

Another small modification I made was to change the cool looking tubeless tyre valve units for some proper inner tubes. Although less pretty to look at they have been fantastic and I haven't needed to check tyres since