So finally Segway is ending production on 15th July 2020

What a sad end to this unique concept vehicle. First on the market in 2001 this vehicle has had such a mixed reception over the years for what is an amazing product. Apparently the total amount of sales since 2001 are a mere 140,000 units

How can such a cool device not be successful? Apparently Steve Jobs was quoted as saying it was "as big a deal as the PC" when it was introduced. In 2006 Segway discontinued all the earlier models and introduced the i2 and X2 models that used the leanstear as opposed to to a turning handlebar for steering. They upped the top speed to 12.5 mph and introduced regenerative braking

In 2015 the company was bought by Ninebot, a Chinese robotics company who were already producing a variety of personal transport systems including electric scooters. In 2014 they released a third generation of the Segway the i2 SE and X2 SE. These were principally the same as the i2 but with minor changes like lighting and a redesign of the frame and leansteer system

Apparently Segway sales only contributed 1.5% of the company profits and the high production cost, low sales and some bad publicity over the years are responsible for putting the iconic Segway to rest

Will this be the death of the various Segway powered wheelchairs like the Omeo, the add Seat, the Sui Gereris or the Going? I so hope not 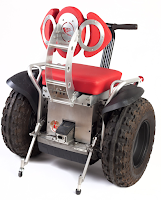 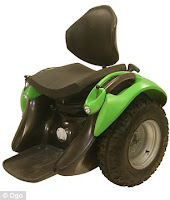 Ninebot produce another 2 wheeled, self-balancing powerbase that is used as the core of other wheelchair systems, notable the Nino. This looks like a great chair and is well priced but doesn't have the charisma or style of the Genny

Built on the Ninebot power base, will this become the standard for the 2 wheeled wheelchairs of the future? - we can't even ask Steve Jobs any more
Posted by David Tipping at 26.6.20 No comments: